For those of you who are fans of WotC's 4e Gamma World, I'd like to remind you of the wonderful Christmas themed Gamma World adventure that they released last year, The Island of the Misfit Omega Tech, found here

Also, a reminder that James M Ward did "evil robot santa claus" YEARS before Futurama did, as shown below.

In the meantime, have a Merry Christmas, or at least accept the wish in the spirit in which it is offered! 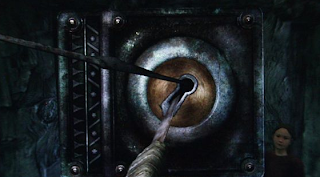 Over on Rather Gamey the other day, Ark was asking how people thought Skyrim would influence pen and paper RPGs.  As I was sitting on my couch this morning, I had an idea - why not use the lockpicking mechanism at my home game?

This is purely conceptual at this point, I haven't had a chance to test it yet, but it seems like it could work.  It helps that I think that the lockpicking minigame is brilliant on it's own, of course.  So my thought is that I save a game in the thieves guild training room, where there is a chest with a lock of each difficulty type to be found.  Leave that game where it is, and continue on with my regular game.  When it comes time for the home game, evaluate the difficulty of the lock, and have the player who is making the attempt have at it with the lock that the GM selects.  Anyone can try and pick a lock, but non-rogues only get one try (one lockpick).  Rogues get an additional lockpick for every 5% they have in Pick Locks (thinking in 2e terms here, adjust as needed for your game system - x number of lockpicks for every x points in that skill, for example).

Once you use up your last lockpick, you jam the lock, so sorry, better luck next time. 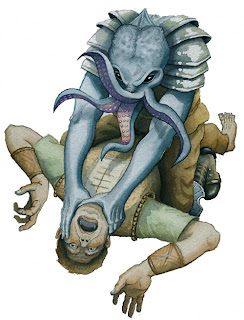 So I've started a 2e campaign, as detailed at Rather Gamey.  One of the things Ark used to do when I was a player in his 4e campaign was generate "color" scenes that took place between sessions.  As the GM, he had a good idea of who we thought each of our characters were, and used those scenes to make sure the rest of us understood what we were going on about.  Alot of the solid roleplaying that took place in that campaign crystalized around the depictions of our characters in those interludes.  So I've decided to take a page from his playbook, and I sent out a description of events to my victims... er, players, that takes place immediately following the events of the last game.  They had been tracking the source of the blue lights which a bunch of mind controlled people/zombies kept insisting were the last things they remembered before zoning out.  Instead of blue lights, they stumbled upon a mind flayer and his skeletal minions.  Hilarity and carnage ensued, culminating in Torvalds, the triple-amputee mage destroying a psionic skeleton by punching it with his one remaining limb.

Torvalds:  Needs no introduction.  Just click on the "Rather" link above.

Chartreuse: Dual Class Ranger/Hot elf chick.  Single minded, kind of violent.  Has vowed revenge for the destruction of her hometown, Honlee, by persons unknown (but she's pretty sure it was Illithids)

Banebeard: Dwarven Temple Guardian Priest: Strode out of the night, determined to use this party as the means to resolving the task his Temple Elders have assigned him - to discover the source of magical energies detected at the now-defunct town of Honlee.  Suspicious of any dwarf that does not use a giant axe or hammer.

Luke Daggerbeard: Of the Havershord Daggerbeards, natch.  Dwarven, definintely.  Fighter, technically.  A little flighty, not afraid to run from a fight.  Does not use a giant axe or hammer.

Towon Lee: International man of mystery/monk.  No-one is actually sure when he joined the party, but it seems as though he's been there all along, and he makes a delightful chai tee, so nobody's complaining.

So without further ado:

These are your heroes, and they are about to get into A LOT of trouble.


Stay tuned for the further adventures of the Companions, as they race towards doom... er, ADVENTURE!
Posted by Unknown at 10:08 AM No comments: 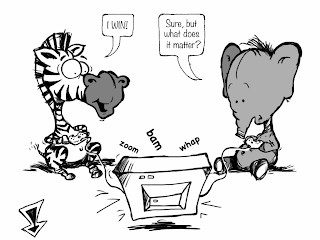 Last night, I picked up a copy of Sorceror, an indie game published by Adept Press in 2002 that was written by Ron Edwards, winner of the 2002 Diana Jones Award for Excellence in Gaming.  This reminded me of how much I enjoy his articles.  I'm a member of The Forge, his forum for game development, although I don't feel as though From The Ashes has developed to the point where I'm comfortable sharing.  I also take time as often as I'm able to read through The Archives for discussions on Game Theory and other various and sundry topics related to RPGs.  A couple of my favorite articles include:

And there are some selected articles Here

I still examine games (and GMs) through the lens of his GNS Theory, even though he's since abandoned it in favor of the Big Model.  GNS just works for me, especially as I GM - I can watch my players and, by figuring out which style of gaming they play, determine what it is they're looking for from my game.

So if you've ever thought about RPGs, I mean really THOUGHT about them, take some time to get to know Mr. Edwards!
Posted by Unknown at 12:52 PM No comments: