I am hitting a mental wall on another post I've been working on for the last week or so, so I'm going to step away from it for a moment and talk about something completely unrelated - how incredibly excited I am for the Les Miserables movie coming out in less than one week!

What's Les Miserables, you say?  Really?  I can't imagine that anyone is actually saying this, but on the off chance you are, it was a book by Victor Hugo that was made into a musical that took the world by storm a couple of decades ago, that is getting remade into a movie, starring Russell Crowe, Hugh Jackman, Amanda Seyfried, Anne Hathaway, Sacha Baron Cohen, Helena Bonham Carter, yeah, pretty much everybody.

It's the tale of the lives of a group of people, with the French Revolution as the backdrop.  It's an emotional rollercoaster - there's love, there's loss, there's life, there's death, and everything in between.  Lots of stories say that, but in this case, it is actually true.

It's also a great story to do one of those alignment chart thingies to: 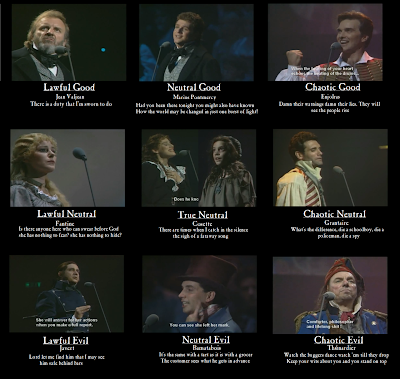 I don't know that I agree with Valjean being cast as Lawful Good, I don't think there is a Lawful Good character to be found in the book (which I think might kinda be the point).  But aside from that quibble, the chart speaks the truth!

It's worth noting that Javert is one of the greatest villains ever created.  Proof of this can be found in the fact that people can't agree on whether he's a villain at all!  That's when you know you've done Lawful Evil right!

And, most recently, a complete rendering of "One More Day" has been released into the wild.  Get it while you can!

Email ThisBlogThis!Share to TwitterShare to FacebookShare to Pinterest
Labels: apropos of nothing, Les Miserables