End of the Line

My wife and I finally finished our epic road trip late Saturday night, and spent all day Sunday doing pretty much nothing.  We're watching Babylon 5 for the first time, so most of the day was spent working through Season 2.

Before we left, we generated a massive, 1200 song playlist on Spotify to accompany us on the road as we traveled.  I've already described one instance where the music synchronized with our experiences, but it happened again late Saturday.

We had lined up a bunch of stops for our last day, trying to squeeze as much into what was left of our time on the road together as possible.  We left out of  Amarillo, TX early Saturday morning, having gotten in to late the night before to get a picture in front of the Cadillac Ranch.  We charged east, swinging through the Jesus Christ Is Lord Truck Stop (no seriously), stopping off to see largest Cross in the Northern Hemisphere (again, no, seriously), a a museum dedicated to the history of barbed wire (I couldn't make this stuff up if I tried), the national Route 66 museum, and finally hitting the Teepee-Shaped Cherokee Trading Post as the sun was setting. 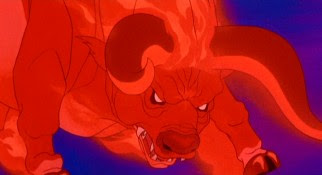 We pulled through Oklahoma City after dark, and set off down the road towards Dallas, and as we rode, Johnny Cash's turn came up on the playlist, and he sang us through the night.  Ghost Riders In the Sky set my mind racing as we drove through the black plains, the tale of damned cowboys forever chasing the Devil's Herd calling to mind the tales of the Wild Hunt.

For a brief bit of time, I was free.  The window was rolled down, the air was sweet and the world seemed like it went on forever, that there was nothing to hold me back, nothing to keep me from doing anything I could imagine.  Ideas popped and snapped in my head like fireworks, and I could see it all.

And then... and then... the lights of Dallas started to appear in the sky.  The darkness was pushed back, and I started seeing the overpasses and the buildings and the cars and the construction.  It turned out my playlist had one final joke to play, one last bit of irony to share...


That isn't my favorite recording, I think the guitar line in the middle betrays the solemnity of the song, but hopefully you get the point.  Honestly, though, hopefully you don't.