For Those About to Rock and/or Die 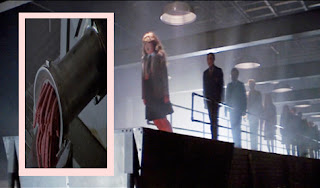 While I understand that DCC RPG's official name for their character creation process is, "The Funnel", I have to say that I don't think that the word captures the essence, the horror, of a formative experience more akin to a meat grinder than a funnel..

Having just completed my first foray into this terrifying process, I would like to petition Goodman Games, in future editions of DCC RPG, refer to this process as the Meat Funnel.

Whether they do or not, I will henceforth refer to it as such.

In any event, of the four characters I started out with last week in Adam and Edgar's Metal Gods of Ur-Hadad campaign, only one remained last night, standing triumphant.  Crag Beerbeard, heroic Dwarven Blacksmith, managed not to outperform, so much as just outlast his compatriots.  He has discovered a bit of an affinity for the Longbow, ironic considering his racial handicaps, but nonetheless he seems to have taken the roll of the Deadeye Crackshot of the party, plugging several ghouls full of holes in last night's session.

Surely the Hall of Heroes will fill with many songs of praise in his honor in the future, but I'd like to spend just a moment remembering the fallen, without whom Crag would not have had his chance to shine.

Miff Sapsipper - Alas, poor Miff, we hardly knew ye.  An Elven Navigator, I had the highest hopes for you.  The Tank of my group of intrepid adventurer's you had 5 hit points.  You were also lucky, born under the loom, which would have given you a +1 bonus to all skill checks, including thief skills.  I had visions of you with your spyglass and short bow as an elite archer assassin sniper type, but unfortunately, you were a bit cocky, feeling invincible with your five hit points, and were taken down in a single strike by a lizard man in the caves.  Someday, Crag will return your spyglass to your family, and tell them of your death.

Michelangelo Aggrosong - Despite your grand name, you were... well, pretty average.  A human cooper with but a single hit point, no-one knows what drove you to pick up your barrel and crowbar and descend into the depths.  A quiet type, you nonetheless showed some promise on the battlefield, releasing your rage as you beat at the lizard men.  Unfortunately, your fearlessness could only carry you so far, and it wasn't long until you fell beneath the might of your enemies.  Crag still carries your crowbar, Michelangelo, as a reminder not to get ahead of himself.

Lardo Cutpurssian - To be honest, no-one was terribly sorry to see Lardo go.  A fat, sweaty merchant, he had heard that there was treasure to be had, and a large group of people to hide behind as he collected it.  Quite smart, and reasonably strong, he was hamstrung by his hefty bulk, horrible asthma and a personality not even his mother could stand.  Even so, he might have made it, but something he saw in those depths caused him to snap.  Seeing his friends mowed down and he himself surviving, he came to believe he was blessed and became reckless, charging ahead of the party, and engaging in one-on-one melee battles.  Poor Lardo, didn't you know you only had but a single Hit Point?  Alas, even padded armor and a long sword couldn't save him, as he was brought down by a ghoul.  The symbol of your devotion to the Merchant God hangs close to Crag's heart.

And so, his companions but memories, grains of sand on the Beach of Time, Crag Beerbeard goes forth, purpose in his stride, a spark in his eye and fire in his belly, determined to learn from his experiences in... The Meat Funnel.