Epic Metal in the Land of Fire and Ice 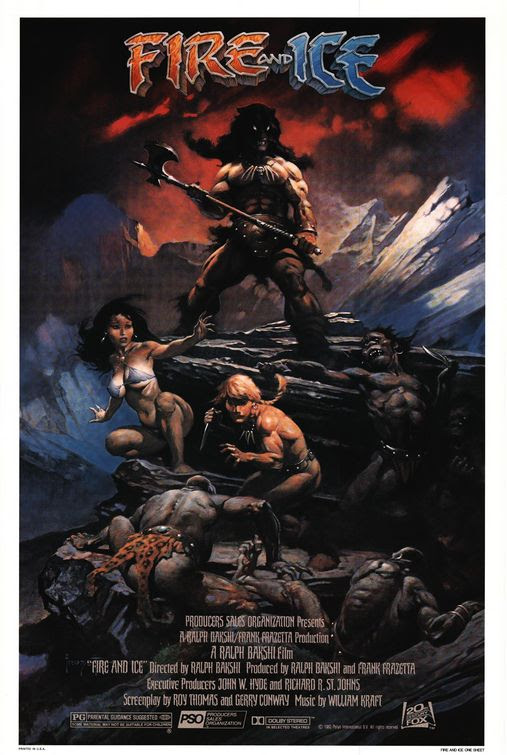 Another post from the road.  My wife and I continue our honeymoon and, having left Arizona behind, are now slowly making our way back to Texas.  We started off yesterday morning in Gallup, and I'm writing this from a hotel in Santa Fe.  We're hunkered down here for Thanksgiving, and plan to head out again on Friday morning.

On our way out to Arizona this past Saturday, we passed by several signs along the side of the highway for something called, "The Land of Fire and Ice".  Looking into it, we found that there was an exploded Volcano sitting right next to a cave full of ice that never rises above 31 degrees, no matter the temperature above.

Well, "Hell Yeah!", we said, and on our way back, we veered off of the highway to see this elemental badassery.  Right off the bat, we were struck by how desolate the location was.  It was twenty miles, through a national park, just to get to the sign telling us to turn off the road.  From there it was another couple of miles along a dirt road, and suddenly there it was - the Trading Post.  $22 later, and we were on our way.  There were trails running to either side of the building, the one to the right leading to the Bandera Volcano, the one to the left to the Ice Cave.

The Trail Guide recommended we take the Volcanic path first.  It's longer and steeper, and the exertion would warm us up, and then we could head to the Ice Cave to cool down.  Taking the advice, we headed up the trail to the Volcano.  The first thing we noticed was huge amount of lichen, covering almost all of the lava rock surfaces.  According to the pamphlet we received, the formation of this primitive life is the first step towards breaking down the lava rocks, a process which occurs over a ridiculously long period of time. 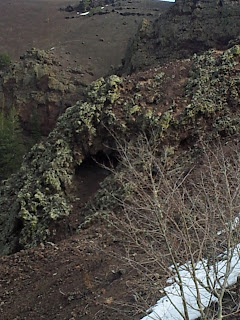 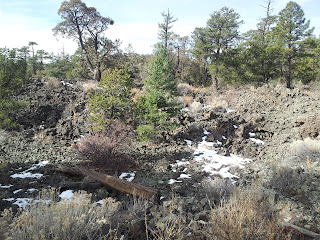 As we ventured forth, we started noticing all these ridiculously twisted and evil looking trees.  Apparently, it's hard for trees to put down roots in the cooled lava.  It can do so, but it ends up causing the trees to look wicked. 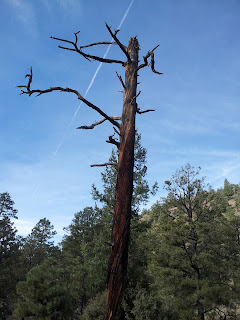 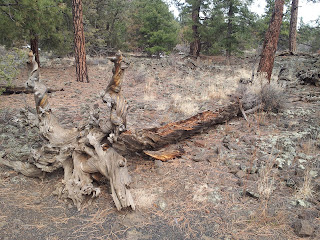 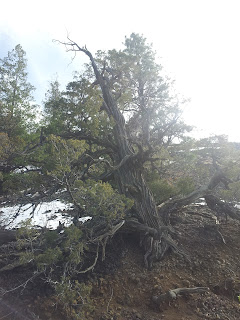 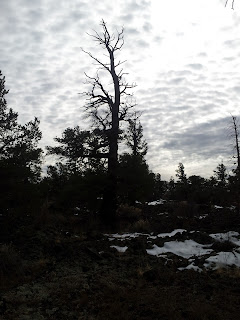 Caves and inlet dotted either side of the trail, dark and mysterious.  Some sat right by the trail, inviting investigation, while others crouched behind the treeline.  Who knows where they lead?  They were all the result of lava tubes cooling in different shapes 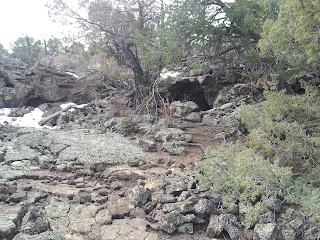 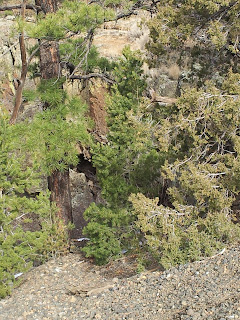 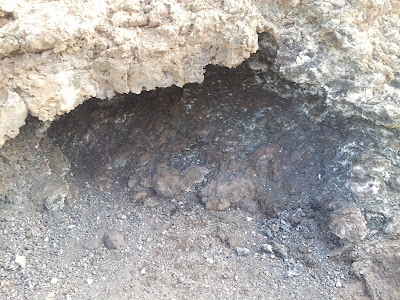 The lava fields became denser and denser, to the point where even if we wanted to leave the trail, it would have been difficult, if not impossible, to traverse the landscape. 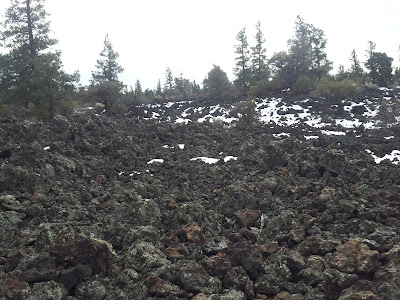 Finally we reached the site of the ancient violence, an inverted cone all that remained of the site where, 10,000 years ago, the earth itself swelled and rose up, before bursting like an infected boil, spewing liquid fire across the land. 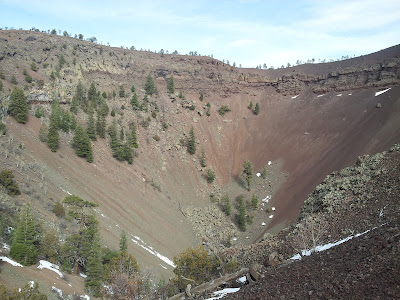 We headed back down the mountainside, past the Trading Post and out towards the Ice Cave.  The trail was easier, but more thickly wooded, and the cries of birds surrounded us as we headed deep into the trees. 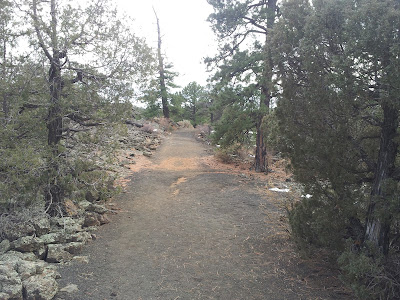 Along the way, there were actual ruins to be seen off to the side of the path, with rocks arranged in specific patterns, as though indicative of ancient, perhaps blasphemous rites performed long ago, and walls, arranged to keep something, or some things, out. 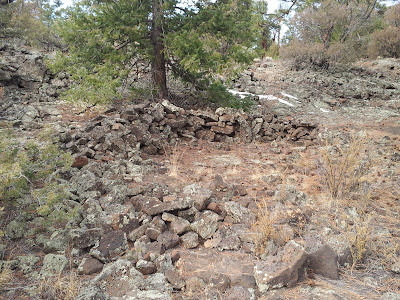 Snow began to dot the landscape as we descended, with patches appearing hither and yon, and small entrances to caves appearing along the path.  This was but a preview of what was to come. 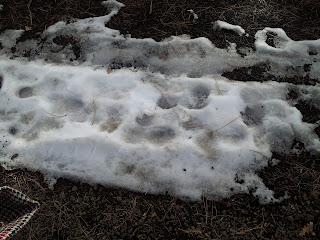 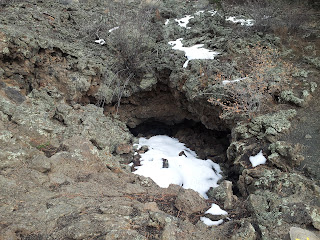 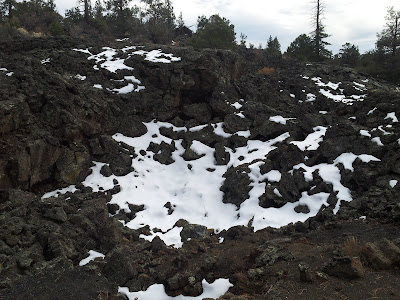 Finally, we came upon the entrance to the cave, the rocks hanging over the entrance menacingly.  As we descended, the rocks took on a greenish hue, as more and more moss was attracted to the moisture in the cave below. 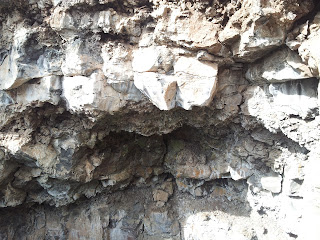 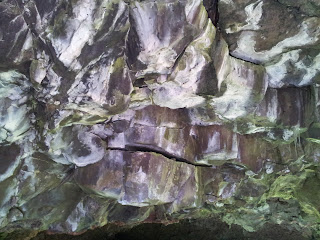 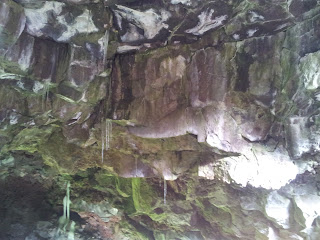 Finally, we reached the base of the cave, where we were confronted by the ice itself.  It's estimated that the first bit of ice was created down here almost 2,000 years ago, by uncertain means.  Since then, it has become a self-perpetuating system, with the existing ice keeping the temperature low enough that rainwater that runs into the cave is turned to ice, and so on.  The moss and lichen in the area has given the ice its signature greenish hue.

The back of the cave was inaccessible, but hinted at dark mysteries hidden in its unseen depths. 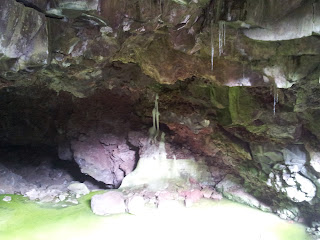 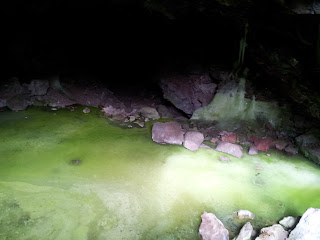 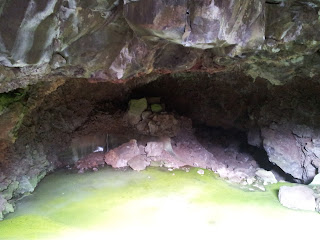 At this point, we headed back down the trail, picked up a few post cards at the Trading Post, and jumped back into the truck.  As we started back towards the highway, we took in the desert around us, the mountains looming in the distance, the wind howling across the vast expanse, and, as if on cue, the most epic song on one of the most epic albums of all time made its way to the top of our playlist, To Wander the Void, by While Heaven Wept.  Between this song, and the sights I'd seen, things began to percolate in my brain.

The album has art by John Martin for its cover, so you know it's gonna be awesome, but check out the lyrics:

Maintaining this course to nowhere I have traveled so far
Far beyond the valley's carnage and death's silent repose
Compelled to journey onward by the calling of the morning star
Haunted by visions and voices, memories or madness providence only knows

I fell to my knees as the last trace of strength slowly faded away
With stone in throat I knew I'd never reach the hallowed and promised land
I conceded my carcass a vulture's feast, my soul eternal umbrae
Once a king, now nameless, forgotten, swallowed by the seas of sand

Yeah, it was an epic freakin' detour.
Posted by Unknown at 6:17 AM